YOUR PEACE OF MIND IS OUR TOP PRIORITY
Should you need to cancel at any time, you have up to 48 hours from your vacation start date to do so for a 100% future travel credit.
15 Unique New Years Countdowns You Didn't Know Existed
Matthew Holland
Forget about the ball drop; see what these cities drop instead

Throughout the world, New Years Eve is celebrated in similar ways with parties, drinks, and fireworks. But in America, we have our own tradition that sets us apart. Starting in 1907, the tradition of the ball drop began in Times Square. Now, the glistening ball is watched by thousands of people across the country and many cities have adopted their own special and unique version of the NYC tradition. However, it appears you can drop just about anything from the sky to celebrate the upcoming year.

Ring in the year with one of these unique New Years Eve ball drops! This tradition is made even more special with celebrations that drop something other than the ball...

Hawaii is the epitome of fun and relaxation. With beautiful weather year-round, you can escape the harsh winter and enjoy your New Years Eve with the ocean breeze and waves. Hawaii takes a flavorful twist on the New Years Eve ball drop by raising a "Hala Kahiki", or Pineapple, up into the air. Sip on some pineapple wine and watch this oversized fruit drop in celebration of the oncoming year in the beautiful Mililani[1]. 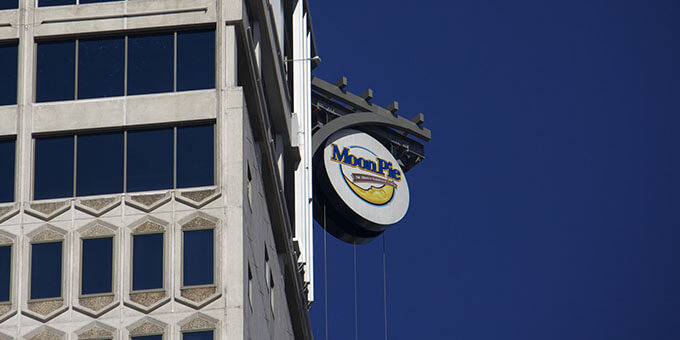 Every year on New Years Eve in downtown Mobile, a giant 600-pound electric moon pie logo is dropped to ring in the year. In case you're not sure, a moon pie is a delicious southern treat that consists of a marshmallow smashed between two graham crackers and then dipped in chocolate. Becoming famous and widely loved by Mobileans, the moon pie was a staple item to be thrown from floats during Mardi Gras and has been a snack staple since 1917 when a coal miner asked for a snack, "As big as the moon." 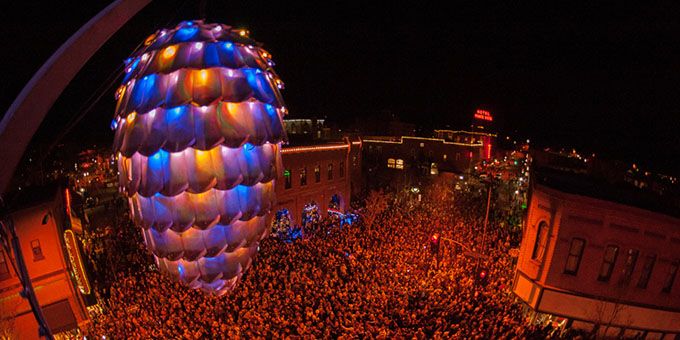 Being near the largest Ponderosa Pine forests in North America, it's fitting that each year in Flagstaff, Arizona is brought in by dropping a giant 70-pound glowing metal pine cone. The citizens of Flagstaff gather in the historic downtown area and watch the cone fall from the bough of the Hotel Weatherford[4].  There is a multitude of live music at local bars and restaurants and, of course, there are fireworks to be enjoyed. 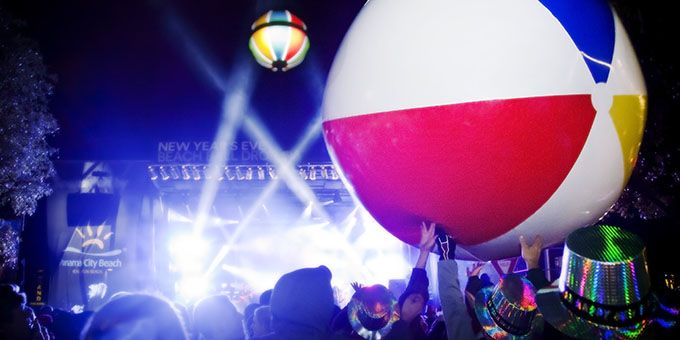 The destination of many a spring break trip and summer getaway; the sand and the promise of a good time are what keeps people coming back, time and time again, to Panama City. Could you honestly imagine the city using anything other than a beach ball for its New Years Eve drop? What a missed opportunity that would have been! In true Panama City fashion, you can enjoy the Pier Park New Year’s Eve Beach Ball Drop with live music, entertainment, and an ocean view. 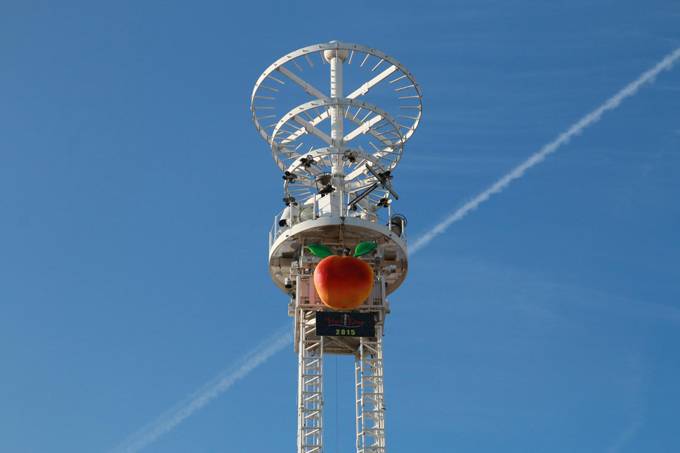 Although not as juicy as a normal Georgia peach, this 800-pound monster is still impressive. The peach has been dropped in Atlanta on NYE since 1989 and the event always includes a full day of festivities. Underground Atlanta offers 16 hours of excitement and starts the day with carnival rides, live music, street performers, and other festival fun. The day ends when the giant peach descends the 138-foot tower and the celebration officially commences along with fireworks. 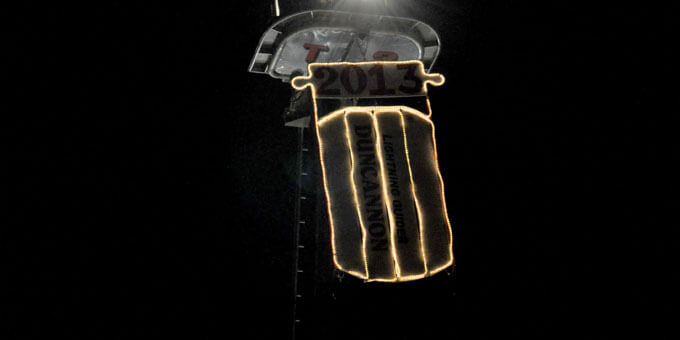 Duncannon, Pennsylvania is all about fun when it comes to their drop tradition, with a giant 10-foot sled instead of a ball. In Germany, it is common to wish someone a "Guten Rutsch", or a "good slide", and this gigantic sled is certainly big enough. Perhaps the people of Duncannon are hoping to wish the same. 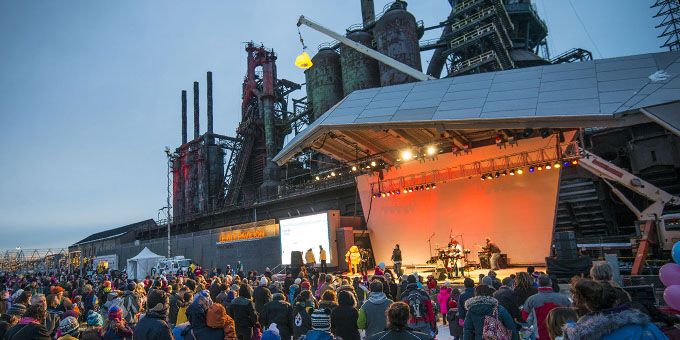 In Bethlehem, PA, Peeps, the signature marshmallow treats, receive recognition on more than just Easter. In fact, an entire festival is named after the cute little candies. Peepfest takes place in late December and includes a 5k race, live music, and other festivities. People wear Peep hats and Peep costumes resembling the squishy snacks. The festival ends at the start of the fresh year with the dropping of an 85-pound artificial Peep, while everyone chants, "Drop that Peep!" 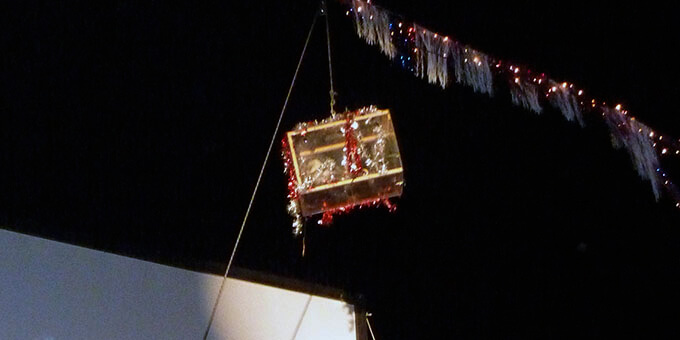 Brasstown is known as the Opossum Capital of the World and it is proud. Each December, the town "delicately lowers" a live opossum in celebration of the coming year. Clay Logan, the founder of the event, says it is "good old redneck fun." The event is intended to pay tribute to the marsupials that reside around the town and has, in the past, included singing by the local church choir, jokes, and firing of muskets. 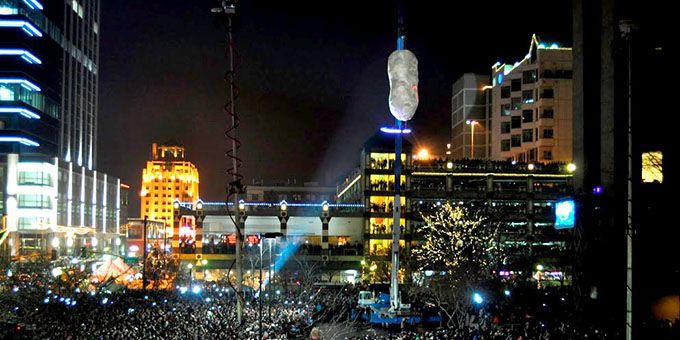 In another state famous for a semi-round piece of food, Boise, Idaho hosts an annual party featuring a giant potato. This is a fairly recently-created festival that began in 2013 and has already seen great success. The event includes a professional fireworks show, live music, and plenty of food. You would not regret attending this event and becoming what they call, "spec-taters." 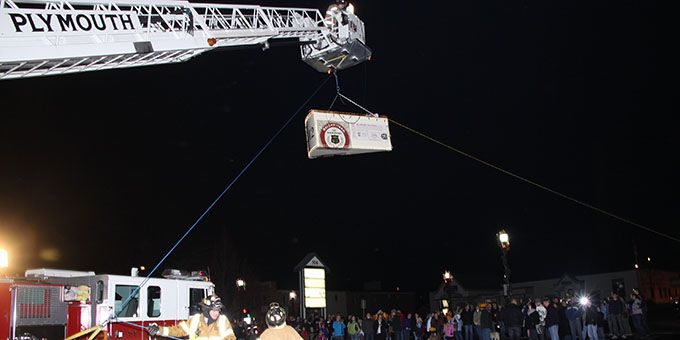 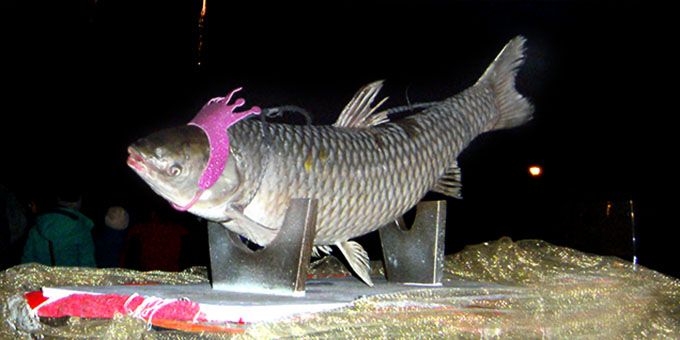 While all of the other cities create an artificial object to drop, Praire du Chien insists on using the real deal. The city hoists a 20 to 30 pound frozen carp named "Lucky" into the air by a crane and slowly lowers the fish down to a throne as the year changes. The oddity doesn't stop there either. After the fish is lowered, people may take turns approaching the fish on the throne to kiss its lifeless lips for good luck in the following year. 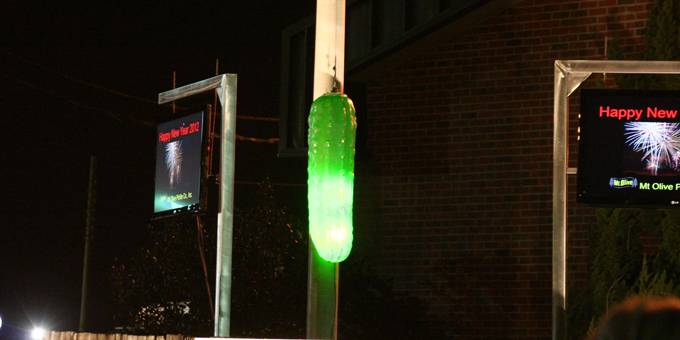 On NYE in Mt. Olive, North Carolina, people gather around the pickle pole at the Mt. Olive Pickle Company on the corner of Cucumber and Vine to celebrate the coming year. At 7 p.m. (which is midnight Greenwich Time), a giant lighted pickle is dropped to splash into a huge wooden redwood pickle tank that is installed beneath the pole. This may seem like a peculiar event and an odd time, but it brings thousands to the small town on New Years Eve and has become a great family event filled with live music and family fun that ends early enough the kids can still take part and get to bed on time. 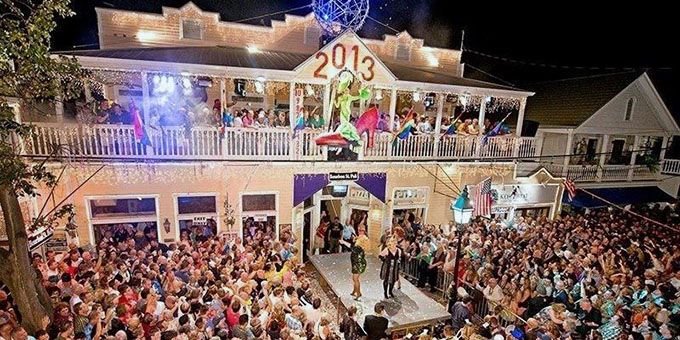 A Drag Queen in a Large Red High Heel[13]

Quite possibly one of the most unique drops happens in Key West, Florida where the world-famous drag queen named Sushi is lowered to the ground in a large red high-heeled shoe. The lowering takes place at the Bourbon Street Pub although visitors can cheer from the popular Duval Street or, with the purchase of VIP tickets, the balcony of the pub. Duval Street is closed off as partygoers enjoy the warm Florida air and watch Sushi provide an unforgettable event as she "drags" everyone into the first celebration of the year. 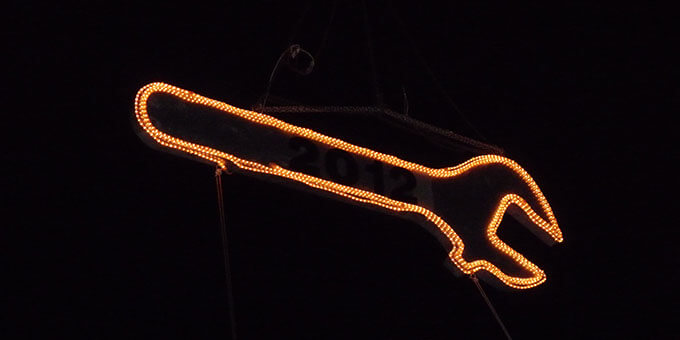 Mechanicsburg, PA rightfully celebrates with the dropping of a large lighted wrench. The event always includes refreshments and music that the whole family will love, as well as some delicious food. The local Boys Scouts troupe will also be around selling commemorative wrench sets to help celebrate the year in the most useful way possible. Complete sets from previous gifts are also selectively available to round out the collection! 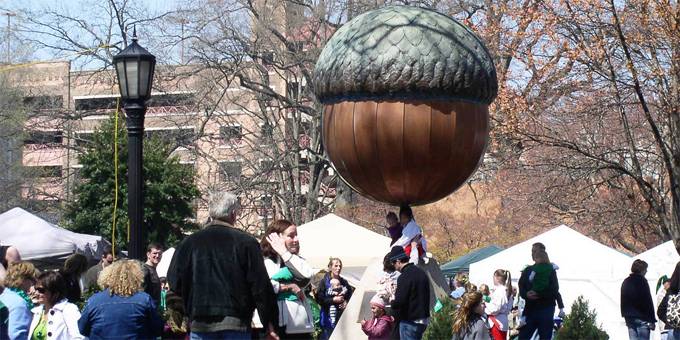 Raleigh's nickname is "The City of the Oaks," and this North Carolina city has celebrated this fact with the dropping of a giant 10-foot, 1,250-pound copper acorn on NYE. Unlike many other cities, this New Years Eve object can be seen at all times. It is always located in Moore Square Park and travels just a few blocks down the street for the festival. There's still no sign of a giant squirrel.

Do you have a favorite drop that you always watch? Have you been to any of these unusual drops? Tell us all about it in the comments and don't forget to like and share!