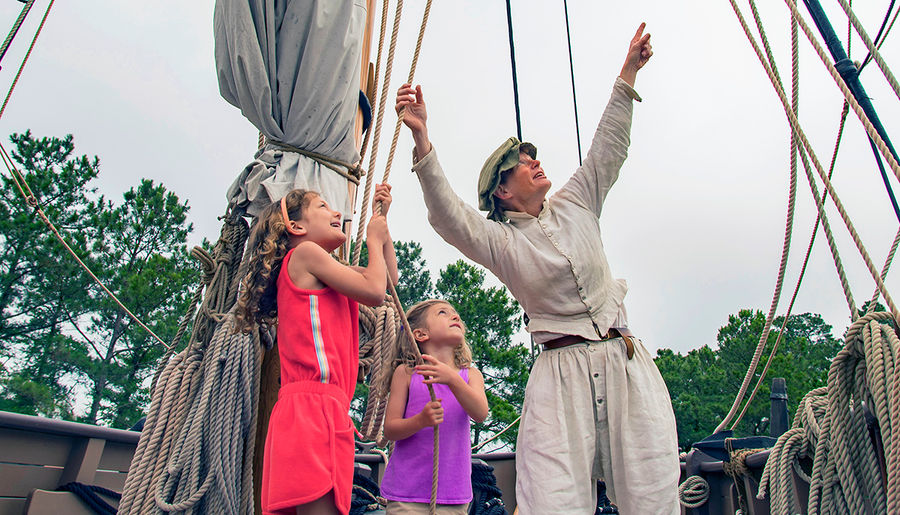 Williamsburg, VA is one of the most historic places in the United States. Since its founding as the capital of the Virginia Colony in 1699, its roots have influenced not only the surrounding area but also the entire country. While the original colonies no longer exist, their legacies, as well as historic sites, are still standing to give visitors an in-depth look at the lives and influence of Williamsburg. During its vast history, Williamsburg saw many historical events happen on its grounds, including important battles in the American Revolutionary War and the American Civil War.

The most well-renowned historic sites in the area include the Jamestown Settlement, Colonial Williamsburg, and the American Revolution Museum at Yorktown.

As the original capital of Virginia, Jamestown is equally historical. In 1607, 104 Englishmen settled Jamestown with three ships: The Susan Constant, Godspeed, and the Discovery. It was chosen because it fit the criteria needed:

The colony was originally led by Edward Maria Winfield, who saw over Jamestown as it quickly succumbed to disease, famine, and more. A harsh winter that happened in 1609 was even rumored to have led them to cannibalism. Thankfully for them, the Powhatan Native Americans gave them food, allowing them to survive longer. Then, in 1612, John Rolfe helped create a new strain of tobacco which helped Jamestown boom. Ultimately, the introduction of slavery was what saved the colony in 1619 and it built its success around tobacco growing and from the labors of its enslaved people.

However, it wasn't enough to save the Jamestown Settlement from failure. In 1624, the Virginia Company was considered bankrupt and the capital of Virginia was eventually moved to modern day Williamsburg.

Some interesting facts about Jamestown:

Modernly, the Jamestown Settlement features a variety of exhibits, including original replicas of the three ships, the military fort, a Powhatan village, and more. By recreating the world of the 1600s, it allows the legacy - and both the success and failures - of Jamestown to be discovered by visitors.

One of the most fascinating pieces of Williamsburg history occurred during the American Revolutionary War. At this historic site, visitors can discover the history of the Battle of Yorktown, a bloody event that happened from September 28 until October 19, 1781. This was the last battle of the American Revolutionary War and ultimately led to America's independence from Britain. Some important historical events that happened because of the Battle of Yorktown:

Because of this battle and its outcome the American government was created, making it perhaps the most important historical event in the country.

Today, the museum displays a variety of artifacts, exhibits, and displays dedicated to the American Revolution and those who fought in it. Visitors will be able to enjoy many films and galleries as well as see a Revolution-era farm, a Continental Army camp, and see stories of free and enslaved African Americans from that time period. This interactive exhibit is known as one of the Top 52 Places to Visit by the New York Times, so it is a must-visit location during your time in Williamsburg.