Things To Do
JESUS at Sight & Sound Theatres Branson
Haygoods
Reza Edge of Illusion Magic Show
WhoDunnit Hoedown A Murder Mystery Dinner Show
Dolly Parton’s Stampede Branson
View All
Contact Us
800-987-9852
YOUR PEACE OF MIND IS OUR TOP PRIORITY
Should you need to cancel at any time, you have up to 48 hours from your vacation start date to do so for a 100% future travel credit.
: BRANSON, MO THINGS TO DO  : BRANSON, MO SHOWS  : BRANSON, MO CHRISTMAS SHOWS

Celebrate outstanding music and a live show in the Ozarks with an amazing performance by a talented artist! Daniel O'Donnell will be bringing his legendary musical talents and warm personality to Branson for one of the area's most popular limited-time performances, allowing guests of all ages to experience his amazing talent.

Daniel O'Donnell is popular in the UK and Ireland for his fabulous tunes, ranging from such genres as gospel to pop, country, and rock. O'Donnell is known for his distinctive blending of country and western with Irish musical traditions, creating a repertoire of lively songs including,  'I Just Wanted To Dance With You,' 'Whatever Happened To Old Fashioned Love,' 'Make The World Go Away,' 'I Need You, The Magic Is There,' 'Four In The Morning,' 'Take Good Care Of Her,' and many others.

Beloved Irish singer and performer, Daniel O'Donnell, has an amazing repertoire and career to his name. He grew up in Kincasslagh, Ireland and began singing in his church choir where he got his roots. He started performing on stage with his older sister, Margaret, and her band playing electric guitar which he didn't know how to play. Eventually, he was allowed to sing and from there he went on to become a performer in his own right. He began recording in 1983, beginning with four tracks such as, 'My Donegal Shore', 'Stand By Me', 'London Leaves' and 'Married By the Bible'. From there, he went through several managing switches and even took a break from singing, but when he returned he performed at the Point in Dublin and his career truly blossomed. Today, he is renowned as one of the most loved Irish performers and has a huge array of music.


Daniel O'Donnell is sure to create an amazing time for everyone, so buy your tickets today to ensure your seat at the show. When you're not hearing the fantastic stylings of Daniel's hit songs, get out and enjoy other delightful Branson attractions or book a hotel stay to complete your getaway.


Daniel's show was one of two that we felt was the very best of all that we saw.
Irene McCoy
IO
✓ Verified Traveler 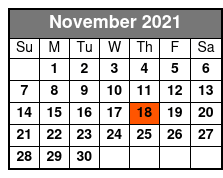