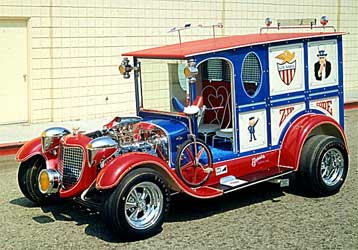 Step behind the wheel and onto the big screen at the Star Cars Museum, which features favorite vehicles from movies like Gone in 60 Seconds, Fast and the Furious, Charlie's Angels, and many more. Do you ever wonder what happened to the Mello Yellow Race Car from the Days of Thunder, or the cars from Gone in 60 Seconds or Charlie's Angels? Wonder no more, you'll find them at the Star Cars Museum. You'll also see cars from The Fast and the Furious, xXx, Back to the Future and more. It's where Hollywood weds the auto industry, and it's a must-see when you visit the area. For the best vacation, be sure to check out similar things to do in the Pigeon Forge area.

My husband and i enjoyed seeing all the cars from our favorite, especially the general lee, the andy griffith section, the beach boys, bob hope and of course elvis.

We visited the museum last year in june. We loved it. We took our one year old and he just kept pointing at everything. We spent a little more then a hour in there and for a place to keep a one year olds attention that long is worth the money. Then they let you take all the pictures you want. The only dispointing part was the ghost buster car was not there. But we are plaining a trip back this year with our no two year old son and 3 month old little girl. Maybe the ghost buster car well be back. We can't wait

It was a great honor to see the star cars in person. A great expirience i will never forget.