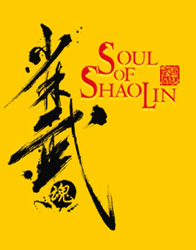 At the popular Eastern Shanghai Theatre in Sevierville, the Soul of Shaolin is an action-packed theatrical performance that will amaze you with acrobatic and martial arts performances while at the same time touching your heart. Soul of Shaolin enjoyed a short run on Broadway, during which time it was recognized with nominations for both Tony and Drama Desk awards.

This award-winning story takes you inside the world of an infant boy who was hidden for his safety by his mother during wartime only to be found too son by a monk who believed he was orphaned. This touching story is filled with martial arts performances by King Fu masters including over thirty Chinese nationals, and also features a talented cast of dramatic performers. The sets of the show are simply amazing, and include a unique 800 square foot backdrop featuring LED lights and other fabulous special effects. The story of Shaolin along with the vivid martial arts and dramatic performances are ideal for all ages, and will both grab your attention and move your heart. Make plans to treat your family to an amazing look at the mystical world of Shaolin with the theatrical production of the Soul of Shaolin. Purchase your tickets today to ensure your seats at the show. Find other things to do in the area for a great vacation.
Details: